Editing the genome without breaking it 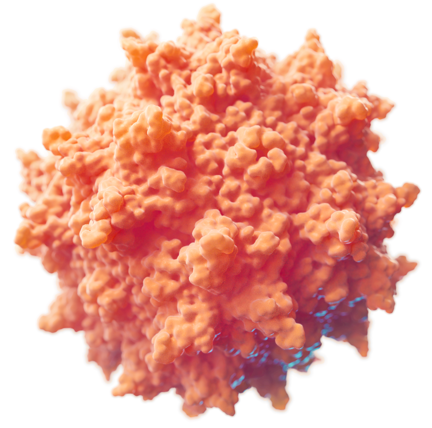 Unlike nuclease-based genome editing, our technology does not require a DNA strand break, does not produce off-target alterations to the genome, does not create unwanted mutations at the target site, and does not introduce foreign nuclease genes. rAAV vectors pose fewer safety concerns than most viral vectors, and have been used in numerous clinical trials, making this technology well-suited for clinical use.

Universal Cells conducts clinical-grade gene editing of human stem cells in our Seattle facilities. Our technology allows us to produce customized stem cells that contain deletions, insertions, or point mutations at any genomic position. Editing is coupled with genomic analysis to ensure that the editing was precise and that unwanted mutations did not occur during the editing process. 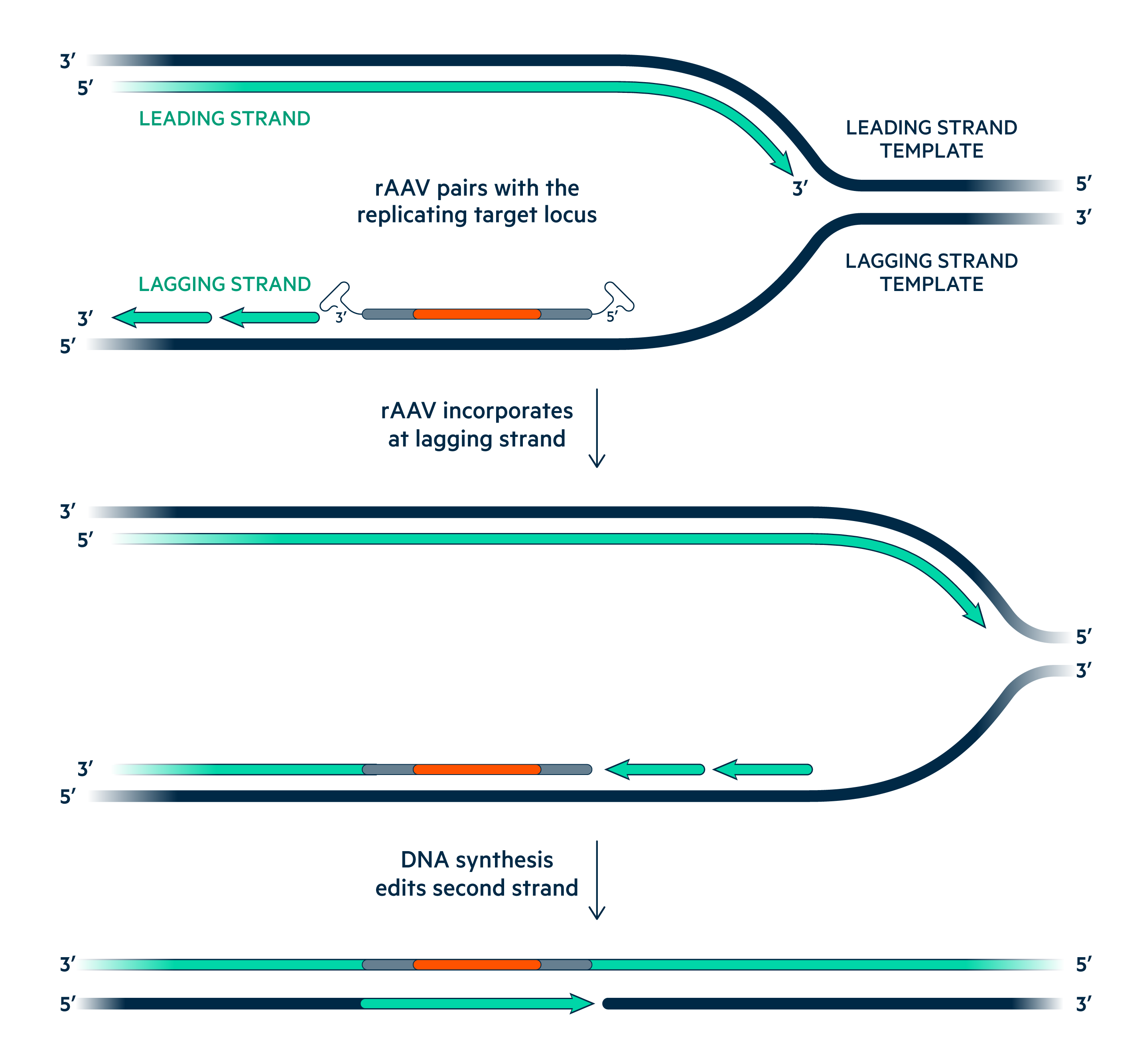 rAAV vectors do not create DNA strand breaks in the genome.

No On Target Mistakes

No need for electroporation or transfection.

No foreign nucleases that could lead to immune rejection.

Cells for every organ 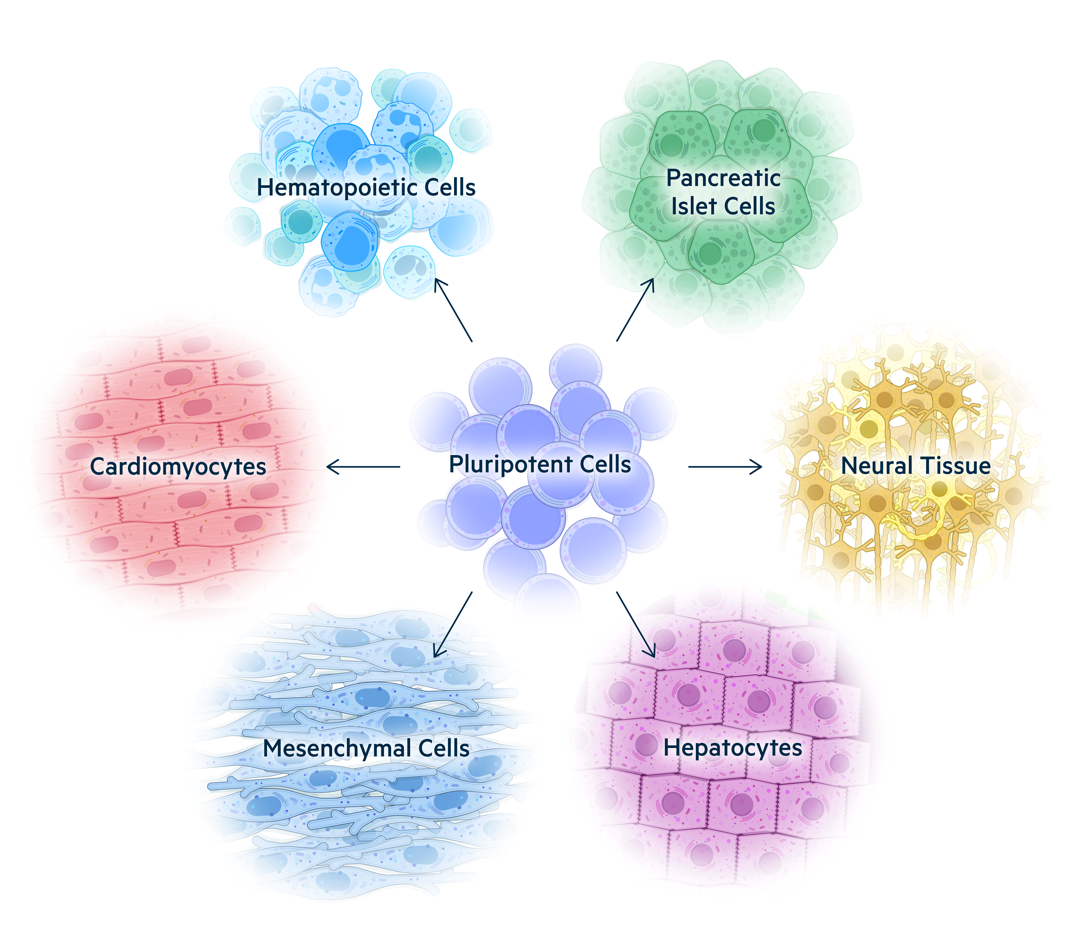 Pluripotent stem cells (PSCs) such as embryonic stem cells (ESCs) and induced PSCs (iPSCs) are undifferentiated stem cells that can differentiate into any cell type found in the body. Scientists around the world are using PSCs to produce more mature cell types with diverse therapeutic functions. These new cell therapies have the potential to change the lives of patients suffering from diseases of nearly every organ system.

PSCs are immortal cells that retain a normal genome, allowing them to produce an unlimited supply of starting material for cell therapies. This also makes them uniquely well suited for genetic manipulation. PSCs can be edited multiple times without losing their proliferative potential.

Universal Cells works with both ESCs and iPSCs that can be used in clinical applications. These cells are edited, cloned, and expanded to produce master cell banks that can be differentiated into multiple therapeutic products.

OUR GOAL
One cell for everyone
No immune suppression. No donor matching. No rejection. 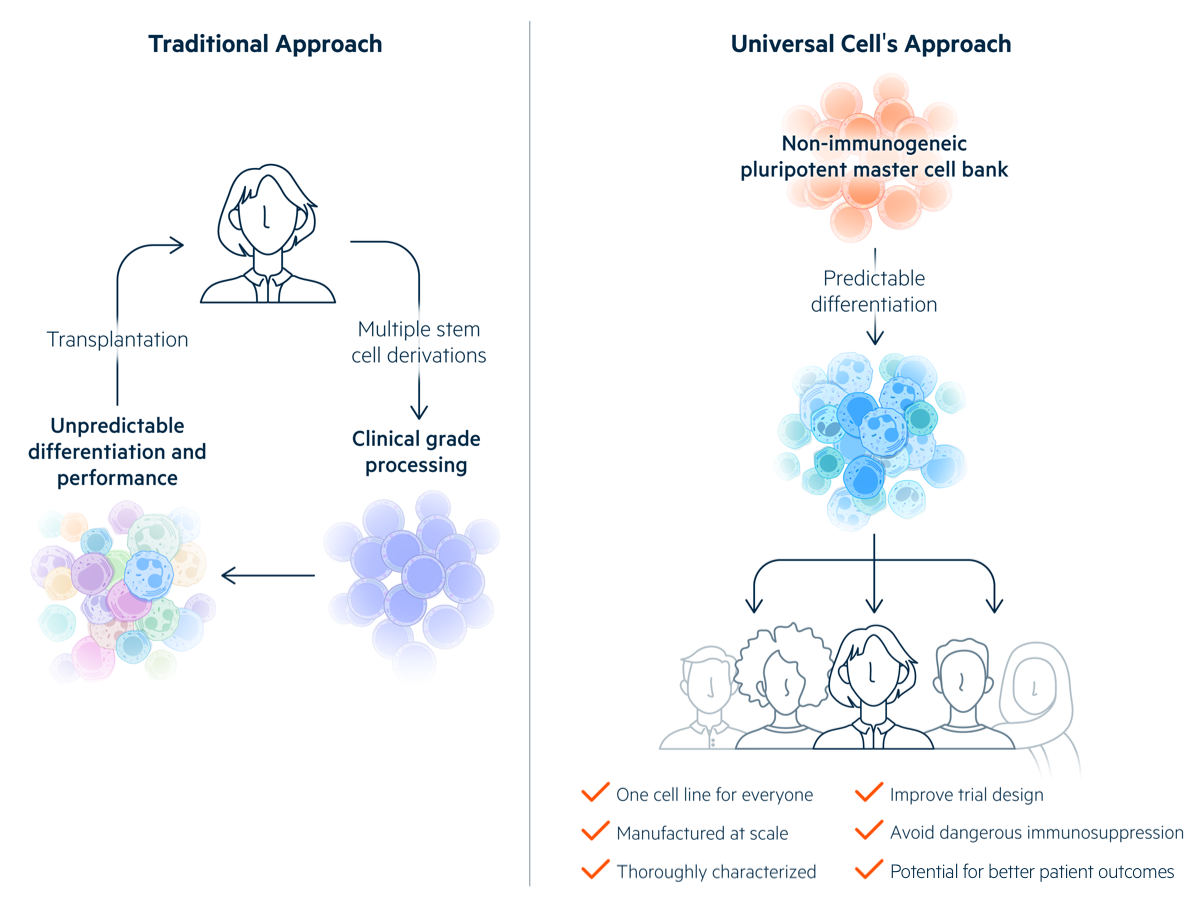 Realizing the potential of pluripotent stem cells requires that the therapeutic cells derived from PSCs be accepted by patients. PSC-derived cells that have not been engineered to avoid allogeneic rejection will be eliminated soon after transplantation unless they are HLA-matched to their recipients, delivered to immune privileged sites, or administered along with potentially dangerous immunosuppression.

A major advantage of Universal Donor Cells (UDCs) is that a single cell line can be differentiated into multiple therapeutic cell products. These Off-the-Shelf products can be tested in clinical trials with the goal of eventual regulatory approval. The aim is for them to be used in any recipient without allogeneic rejection, reducing costs and leading to better patient outcomes.

Significant evidence supports the concept that HLA-engineered cells will function normally and avoid rejection after transplantation. Rare human individuals who are HLA class I-negative or class II-negative are relatively normal except for their expected immune system consequences, as are mice with MHC class I and class II deficiencies, demonstrating that HLA-negative cells can form all essential organs. Importantly, mouse transplantation experiments have shown that organs or cells from MHC-negative donors survive longer in allogeneic recipients (sometimes persisting indefinitely), including liver cells, kidneys, hearts and pancreatic islets. These mouse experiments suggest that HLA-engineered human cells will also survive longer than allogeneic cells in many clinical settings. HLA-engineered human cells have also been shown to avoid allogeneic responses in vitro and in animal models.

Class I molecules present peptides to CD8+ T cells and are composed of B2M paired with diverse heavy alpha chains. Human cells express two alleles each of three polymorphic HLA class I molecules (A,B and C) that must be matched to recipients, as well as the non-polymorphic HLA-E molecule.

Universal Donor Cells do not express free B2M and lack surface expression of HLA-A, B and C. The B2M-HLA-E single chain fusion protein is expressed from the B2M locus to inhibit lysis by host NK cells, with or without a covalently attached antigenic peptide in the trimer and dimer forms respectively.

HLA-A, B and C are polymorphic class I proteins expressed by most nucleated cells that must be matched for histocompatibility. The Beta-2 Microglobulin (B2M) gene encodes a common subunit essential for cell surface expression of all HLA class I heterodimers (the other subunits are the heavy chains for HLA-A, B, C, E, F, or G), so B2M-/- cells are class I-deficient. Universal Cells edits both B2M genes to create human pluripotent cells that lack polymorphic class I proteins. These editing steps also introduce suicide gene(s) such as Thymidine Kinase (TK) to allow for in vivo elimination of transplanted cells.
A complete lack of class I expression can lead to lysis by Natural Killer (NK) cells. To overcome this “missing self” response, our Universal Donor Cells express a non-polymorphic class I gene such as HLA-E at the B2M locus through single chain technology. This provides a class I-positive signal to inhibit NK cells. These class I-engineered stem cells can serve as universal donor cells in applications where the differentiated cell product does not express HLA class II.

The HLA Class II molecules DP, DQ and DR present peptides to CD4+ T cells and are composed of polymorphic alpha and beta chains. All Class II molecules are expressed from promoters that require the same set of transcription factors.

Mutations in the transcription factors RFX5, RFXANK, RFXAP, or CIITA prevent HLA class II expression and cause Bare Lymphocyte Syndrome. Universal Donor Cells can be engineered to lack one of these factors. The single chain HLA-E molecule produced by class I engineering is still expressed.

HLA class II molecules are expressed on antigen presenting cells such as dendritic cells, macrophages and B cells, and many other cell types upregulate their expression in response to inflammation and other signals. Unlike HLA class I, class II proteins lack a common subunit that can be edited to prevent surface expression. Instead, Universal Cells edits one of the four transcription factor genes required for all class II gene expression (CIITA, RFXANK, RFX5, RFXAP). Bare Lymphocyte Syndrome patients with mutations in these genes do not express class II molecules on their antigen presenting cells, but are otherwise normal. Combining class I and class II engineering creates universal donor stem cell lines that are appropriate for deriving many differentiated cell products.